skip to main | skip to sidebar

Pre-JOGLE Musings, or How It All Came About.

Where We Are Introduced To Our Narrator, Will, His Partner In Crime Ray, And See His Journey Of Pain To Become A ‘Cyclist’.

My name is Will Rowe, and I have thing about journeys. I’m a huge fan of science fiction and fantasy (but not a geek!! Never that. Well – maybe a little) and there is always a heroic quest of some sort where normal people go off and achieve quite extraordinary feats and come back home after many long miles travelled and hardships overcome, and it seems to me that there is a theme through all of this: time on the road, it changes a man.

After some heavy research spent on the internet, reading the blogs of other daring adventurers I was quite convinced that this was The Thing For Me – I was going to LEJOG (I already had the lingo down), and try and raise some cash for worthy charities. There were only a couple of things stopping me: I hadn’t ridden a bike for years, was 16 stone 9lbs when I should have been a tad lighter, and had a feeling that I was going to get a certain amount ribbing from my “supportive” group of friends.

You see, I have had a habit in the past of trying to do endurance events and failing massively (take my ill-fated attempt to complete the West Highland Way for example – blisters called it off on day 2, and the next attempt the year after I started throwing up on day 3) I had to pray that this was going to be the exception.

After much deliberation in the pub I decided to come south rather than head north as it seemed easier to get home from Land’s End than from John O’Groats. I wasn’t going to LEJOG: I was going to JOGLE, to use the ‘end2enders’ parlance.

All alone, on the road to nowhere I was going to dig deep and power on through. On my own. I began to feel the fear.

Dammit – I needed a partner to help get through this madness!! 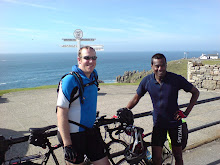